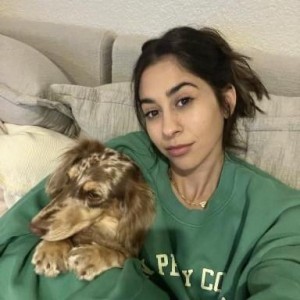 I have decided to share my experience on double dapples and some information that I think everyone should hear about. Some of you may know I have a double dapple who is named Si (pictured above) she is the first dachshund I ever got and is the boss of the household. I adopted Si at six weeks old when I was 17 from a lady that was not a breeder. The lady was one of those “it was an accidental breeding” type… besides the point, Si is now seven years old. When I got Si, her blue eye had partial vision and the other under developed eye never fully formed. I was told Si was albino and her eye would eventually develop.. gullible me not thinking that was complete BS, since I wasn’t as experienced with dachshunds let alone double dapples as I am now. I didn’t care she was adorable with or without her eye, so I got her anyways. Si ended up going blind at the age of five her hearing is perfect, though she pretends to be deaf. I would say she for sure has selective hearing (LOL). When I first got her as a puppy, I took her to the vet to see if they could tell me what was going on with her eye, because I wanted to make sure she wasn’t in any pain or that it wasn’t going to be anything life threatening. The vet did not know why her eye was missing, so I got to digging on the internet and found out about double dapples. When I put two and two together, I then noticed HELLOOOO my baby girl was just born this way, because the lady who bred her was irresponsible. Before even breeding them the lady should have DNA tested both of the parents to ensure that they are not both dapples. From what I was told she didn’t intentionally want to breed her two dapple doxies in the first place (EYE ROLL) so I am assuming that is why there was no DNA test involved. Si’s mom looked just like her except she had both eyes with an entirely pink nose, her dad was all red, but I remember that he had some black spots spread out but very blended in with his coat. Red dapple markings generally disappear or spread out as they get older. The lady most likely didn’t know that he was a dapple. Photos below of a red dapple puppy and a red dapple adult to show how much their dappling disapears as they grow, which makes them appear to be solid and then accidental double dapples are then bred. 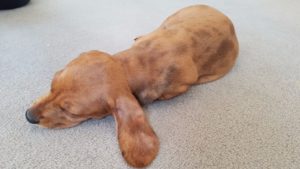 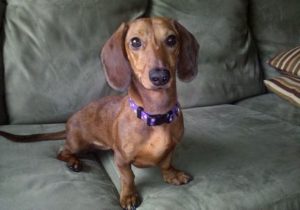 Once I was more informed on exactly what a double dapple was I had a talk with the lady and she did end up spaying Si’s mama. Believe it or not, some people breed double dapples on purpose to get that unique pattern. Yes there may be one in the litter with good eyesight and perfect hearing, but the others in the litter have to suffer from the harsh effects of that selfish person making an irresponsible decision, it makes me sick. Double dappling occurs For reasons unknown, the combination of two dapple genes hitting the same area of the dog can be lethal. I have seen double dapple puppies born with no eyes, no ears, blind, and deaf these are all caused by the double dapple gene. 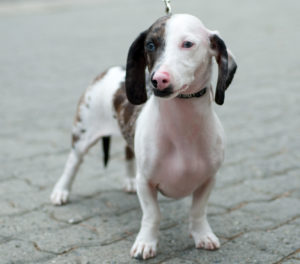 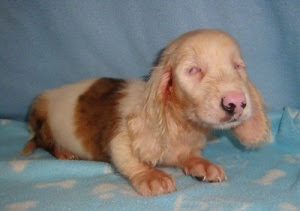 On the other hand, a double dapple can be born with little to no deformities at all, as I mentioned earlier. Some breeders will claim their double dapple puppies are piebald to continue breeding that particular dachshund without others getting angry. What they don’t understand is that us breeders can spot a double dapple from a mile away. We will 100% let you know what your doing is wrong and should not be continued. A double dapple will always have a funky look to them, a lot of the time the best way to spot out a double dapple is by looking at their eyes because one is normally bigger than the other. I will place a photo below of these two patterns for you to compare. 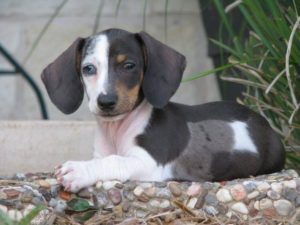 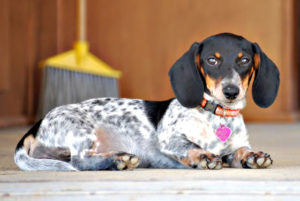 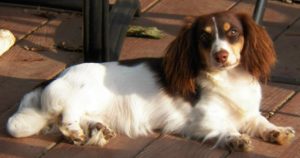 To avoid a double dapple breeding, you should DNA test the parent that seems to be a solid, because of the hidden dapple gene. Some dachshunds will look like a solid but they are hidden dapple, or some will be solid with one or two blue eyes since only dapples can have blue eyes that would clearly mean not to breed that one to another dapple. To produce normal dapples you would need to make sure one is dapple, and the other male or female is a solid or any other pattern than a dapple. Producing double dapples is very frowned upon in the breeding world, and I hope this horrible thing comes to an end altogether. 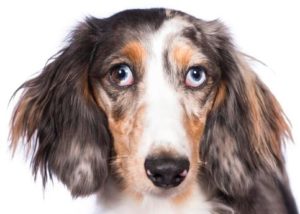